The Park has a long history of European ownership. Anecdotal stories tell of canoeing on the large oxbow lake, motor cycle races around the Park and a cycle races. 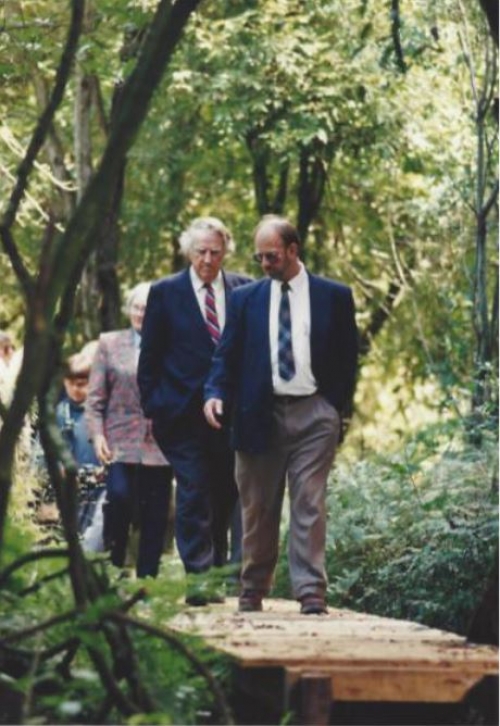 Many famous visitors have come to the Park including local and international academics.

The Park has been visited many famous and learned people over the years, among them Sir Edmund Hillary, who came in 1996 to celebrate 80 years since the opening of the Park. Professor David Bellamy has always taken a keen interest and in 2016 Minister Nick Smith came with Rangitikei MP Ian McKelvie, and a team of academics from Harvard University, USA and Barcelona University, Spain, arrived unexpectedly to check on the insect population, in particular the very rare spiders. There have also been numerous university and research papers written on Kitchener Park and the importance placed on its continuing wellbeing. The Prime Minister Bill English opened the new boardwalk. It was mainly because of all the interest in the Park that the Manawatu District Council established in 2013, a Trust to ensure the survival and restoration of the forest.

Recently the Trust has purchased a block of land adjacent to the Park. Recent floods have revealed the old road to Feilding which ran across this block and logs have been uncovered. This may be the original corduroy road and the Trust has engaged an archaeologist to research this. The road is believed to have been created in the 1870's. 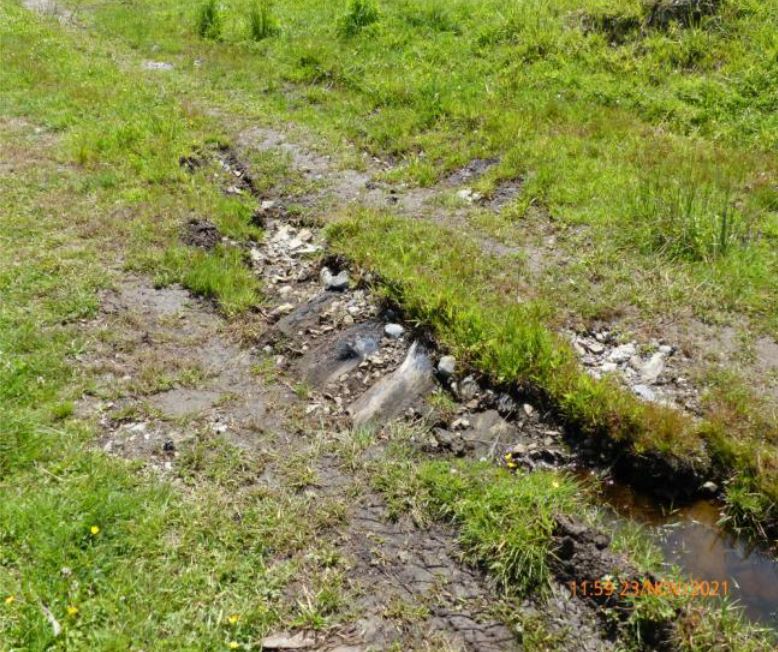 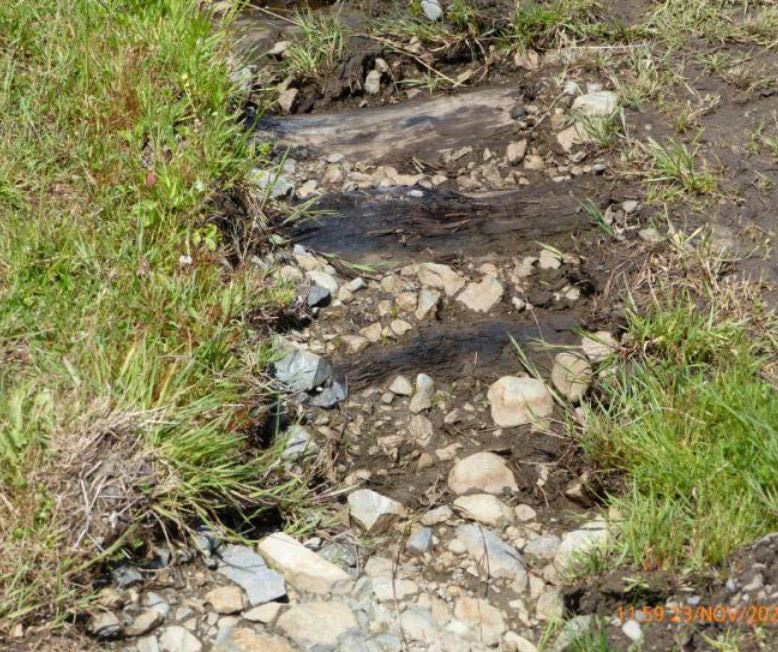 In the April 2019 edition of the Coach House Chronicle in the brief history of the Kitchener Park land it is stated that it was leased by local Maori to John Hughey, who later purchased it freehold.

Although John Hughey went through the process to freehold land at Kawakawa, both he and his brother-in-law, James Whisker, who also leased land there, were both freehold owners for virtually a moment in time.

It was James Whisker and his brother William who in 1866 first negotiated an informal lease of the Kawakawa land from Te Kooro Te One as a leader of Ngati Kauwhata. The pair were later joined by their brother Thomas, who came to New Zealand in 1871, and by John Hughey, who in 1875 married Mary Whisker, their sister.

When the long-drawn out sale of the Rangitikei-Manawatu Block was concluded a number of areas were designated as “native reserves”. Kawakawa (section 149) was not one of those, but was set aside later as an additional reserve in acknowledgement of the “nonselling” status of some (but not all) of the hapu groups of Ngati Kauwhata at Awahuri. They had steadfastly refused to agree to the sale of their land, or to accept any payment when the sale finally went through.

The Crown grant for section 149 was finally issued to the Ngati Kauwhata grantees in February 1874, meaning a formal lease agreement could then be drawn up between Te Kooro te One, as leader of the grantee group, and James Whisker and John Hughey.

That was not what Whisker and Hughey had been hoping for. According to a letter from James Whisker on file at National Archives, Isaac Featherston, as negotiator of the Rangitikei-Manawatu purchase, had promised all the Europeans who were leasing runs in the area pre-purchase that each would be entitled to 640 freehold acres “upon which their homestead is erected.” Whisker stated that this promise had been honoured in all cases except for the Kawakawa native reserve land. In addition, in 1863, during the Rangitikei-Manawatu negotiations Featherston had impounded all the rents then being paid to the various hapu by the European settlers who were leasing land to run sheep. The issue of paying out these back rents went on until at least the end of 1868. However, despite the instruction from Featherston that rent was not to be paid to the lessors, according to Whisker’s own account, he ignored the instruction and paid Te Kooro te One direct. By 1874, Whisker and Hughey, were, therefore, starting to feel hard done by.

Meanwhile, the “nonselling” Ngati Kauwhata groups were enmeshed in multiple hearings over their land claims in the Native Land Court, and from the late 1860s  Alexander McDonald acted as their agent. Today McDonald is most commonly remembered for his protest action on behalf of Ngati Kauwhata claims, when he shot the horse pulling the mail coach at Awahuri in May 1874. He had farmed land at Awahuri from the late 1850s and formed a close friendship with members of the Ngati Kauwhata nonseller group. By 1876 these nonsellers owed over £2,000 from costs incurred in their ongoing legal battles and, in the name of Te Kooro te One, a mortgage was taken out on a block of their reserve land known as “Awahuri A.” The mortgagor was William Common, a wool broker and merchant, then based in Wellington in partnership with the families that eventually morphed in the business known as Murray Roberts. But, significantly, in 1879, the other partners bought him out because they did not like the way he was habitually “overadvancing” to clients. In Hawke’s Bay and Gisborne, then Common set up his own business, it was much- used strategy aimed at getting Maori owners into financial difficulty so that they had to sell their land. In January 1880, Common foreclosed on the mortgage on the Awahuri land and, with the Ngati Kauwhata owners facing the prospect of a forced sale, McDonald himself bought Awahuri A, at the same time selling neighbouring land that Ngati Kauwhata had given his wife Annie while he was in jail in 1875 for £12,500.

What does that have to do with the Kawakawa land? In 1883 Whisker, Hughey, and the Ngati Kauwhata grantees – who were now headed by Te Ara Takana, as Te Kooro te One had died in 1877 - sought permission for the Kawakawa Native Reserve to be “alienated” – that is to revise its reserve status so that Whisker and Hughey could buy it. Native Reserves Commissioner, Alexander Mackay, who was appointed to look into the alienation request, quickly realised that the Ngati Kauwhata applicants had their homes, gardens, crops, and grazing land on the Awahuri A block, which was now owned by McDonald. Mackay was appalled and his recommended solution was that McDonald sell back 1,253 acres of Awahuri A to the Ngati Kauwhata group for the £5,000 price he had paid, and that Whisker and Hughey pay to the Public Trustee £7 per acre for the Kawakawa land, so that the Ngati Kauwhata grantees could then use that money to pay McDonald for the Awahuri land.

There is official record in (Deed Books 84 and 85) that in April 1885 Hughey paid £3,150, and James Whisker paid £3,307 to Mackay as Trust Commissioner for their respective shares of the Kawakawa land conveyance of the land to Whisker is recorded on 20 April and to Hughey on 23 May, along with confirmation of the transfer of the Awahuri land from McDonald to the Ngati Kauwhata grantees. But the 1880s were a “bust after boom” period in New Zealand, and Whisker and Hughey were caught up in the situation of being able to borrow large amounts of money and then not having sufficient means to make repayment. In August 1885,  Charles Bull of Aorangi, who had acted as guarantor for Hughey, exercised his power of sale when Hughey defaulted on his loan. The land was put up for auction and Bull bought it. James Whisker’s share of Kawakawa was leased with a right to purchase after 2 years, by John Manson, who owned 1000s of acres in Manawatu, and who lived at The Pines in Feilding. James Whisker himself simply disappeared off the face of the earth–much easier to do in those days than it is now. His wife, Catherine, and their sons continued to lease and farm land at Awahuri, but not on section 149. The Hugheys stayed in the Feilding area, and in their old age lived on a property in Ranfurly Road.

That is not even the halfway mark of the story of what happened between McDonald and Ngati Kauwhata, but, in terms of the Kawakawa land, it was lost to both the Ngati Kauwhata and to James Whisker and John Hughey. The next owner Edward Riddiford took great care of the site and resisted calls from the local community to sell it to the Council. When he died in 1911 his son negotiated with the Feilding Borough Council to buy the bush area and local subscriptions were sought for this purchase. The 18 acre strip of land opposite Awahuri Bush known as Whisker's Bush was purchased by the Government after visits from Ministers. The official opening of the two reserves took place in January 1916 and six months later the reserve was named Kitchener Park in honour of Lord Kitchener.

It has been maintained by the Manawatu District Council since amalgamation. Sadly over the years the Park became neglected until a new restoration initiative was put in place in 1991 when the closing of the local meat works left many workers unemployed. Led by six former staff members and industrial chaplain Gavin Scott a group of these men set to work in Kitchener Park to weed and re-plant many of the species that had been lost over the years of flooding and neglect. Funding for this scheme was approved by the Manawatu District Council and voluntary work continued when this ran out.

The massive task of weeding out all the tradescantia (Wandering Jew) that had smothered all the re-growth of native seedlings was a priority. Whilst much of this invasive weed was sprayed, there was also the necessity of hand weeding to ensure the last remnants of the plants were removed. Gradually the forest was cleared and tracks and boardwalks were created.

Sadly there was a massive flood in October 1998, the worst in twenty two years and thick mud swept in and coated the Park wrecking much of the work. The reserve was littered with debris and boardwalks were ruined. Volunteers once again, set to work to repair and restore the Park but two subsequent floods in 2015 and 2016 continued to damage and destroy species